The History of Metal Forging

Forging is a craft, and one of the oldest forms of manufacturing, that has helped evolve the human lives and history. Dating back to as early as 4000 BC, metals were forged by the early man to create hand tools and weapons that have aided in the survival of mankind. The early days of forging involved having metals heated and applying pressure to shape it.  During the Dark Ages, metal was a symbol of wealth and production of metal weapons boomed.  Although copper has been one of the first metals that were used by early forging blacksmiths to pound into desired shapes, there is also evidence that alloys, titanium, aluminum, and steels were used. Wrought iron and steel were forged into weapons by the method of open die forging well into the 19th century.

In 1856, the invention of the Bessemer Process was a major breakthrough for the ferrous metal forging industry. Now, forging smiths could forge interchangeable parts more quickly at a high production rate with an abundant supply of steel. The Colt Arms Company developed the first forms of forging metal within cavities using a closed die process and machining fixtures, which was used to produce the components of their famous guns. The metal forging industry grew even more sophisticated in the late 20th and early 21st centuries. The invention of the forging press in the 1930’s allowed for higher production rates while being less labor intensive than the old technique of hammering by hand. Today, complex modern technology and engineering could simulate the ancient art of hammering hot metal by hand using computer-aided design and computer controlled hammers and presses.

Although hot forging has been around for centuries, the term warm forging originated sometime around 1950.  Nowadays, we have the high-tech technology to perform advanced methods of cold forging using closed impression dies, a new and competitve method in the industry that allows for high quality products to be forged under cold temperature while saving costs due to the already finished nature of the results. DF Precision Inc. is a Los Angeles Forging company with over 20 years of expertise in the industry. Their specialty in cold forging has established them as industry leaders of this up and coming  high-tech process in metal forging.  For more information or to submit a RFQ, please call 626-572-7988 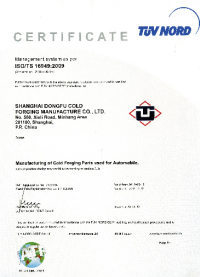 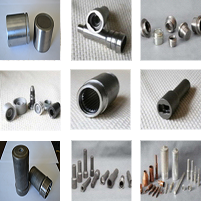 DF Precision is a high-tech Michigan based company specializing in forging of metal parts for national and international markets.